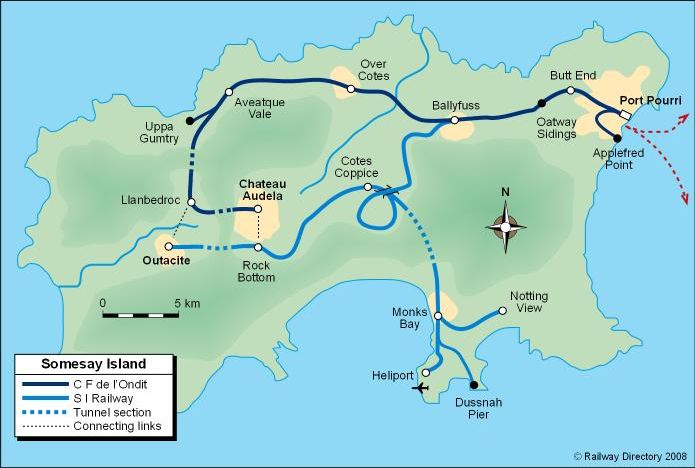 Somesay Island and its Railways, the Geographical context

Between England and the coast of Northern France lie the Channel Islands, two large islands (Jersey and Guernsey), and several other smaller Islands. Although part of the United Kingdom, French is as much a factor in the culture as English. Jersey and Guernsey in the past supported several rail operations, with further military lines laid during the German Occupation in WWII. Alderney still has a short tourist line, and at least one of the smaller islands bans the private automobile.

The Island of Somesay, it is supposed, lies to the West of the other islands, and has not been as much in the public eye. With nearly 100,000 inhabitants it is slightly more populous than Jersey, and slightly larger in land mass. Half the population are French, who call the island l’Ondit. The local legislature continues to oppose the introduction to the island of private cars, preferring instead to place its trust in public transport. This policy comes up for review every five years, and the concessionaires of the railways are at pains to ensure that they give the islanders a frequency and quality of service that does not put this privileged position in jeopardy.

There are ten major townships on the Island and eight of these are reproduced on the model (Outacite and Chateau Audela are, as their names suggest, “offstage”, but still receive and forward trains. Ballyfuss, Cotes Coppice and Aveatque Vale (The Vale) have no originating or receiving industries (other than locomotive fuel). Bally fuss is where the SIR lines leave the Main line between Llanbedroc and Port Pourri, and is the effective hub of the system. Cotes Coppice is where trains between Monks Bay and Ballyfuss/ Butt End /Port Pourri must reverse. The Other towns all have important industries as follows:

Port Pourri is the main port for all but the fishing fleet. All trade with the outside world (including the bulk of passengers), passes through this terminal. There are direct passenger services from Port Pourri to Chateau Audela and Outacite.

Butt End is the main marshalling yard (Oatway Sidings), and headquarters for the railway. It is also home for the Finchers engineering works, and a plant for bottling the Green Frog beer brewed at Over Cotes. Ballyfuss is a monastery town, the original home of Green Frog beer. Nowadays it is an important junction with a small locomotive depot. Demand for Green Frog Beer has grown to the point where a new brewery is served by a branch-line from neighbouring Over Cotes.

Monks Bay is a small shallow draft fishing port. However the port is being redeveloped and aggregate for new concrete wharfs is being brought in from the Vale. Monks Bay is now also the site of the islands Heliport, recently re-located from Butt End, and a Railbus service links the Heliport with the rest of the Island. Recent industrial expansion is served by two short branches to Notting View and Dussnah Pier, meaning that Monks Bay sees growing freight traffic.

Rock Bottom is a former mining community, and serves the surrounding countryside with general freight.

Roman settlement is thought to account for the hamlet of Aveatque Vale. Pronunciation difficulties mean that, the Station is referred to simply as “The Vale”. These days the Vale is dominated by the large “Wendy B Mine” grading and loading plant. Train loads of aggregate are despatched to both Port Pourri, and Monks Bay.

The island’s main dairy, is to be found at Uppa Gumtry, on a branch line from the Vale.

Llanbedroc is a spa town, and, it has been suggested, was originally a centre of settlement by exiles from Wales. Llanbedroc has built a sizable export business for its enervating mineral water Eau Contraire.

Chateau Audela is the administrative Capital of the Island and requires deliveries of general merchandise.

Outacite is another industrial town, with processed food plants, including a fish cannery