On Somesay the railways run from Port Pourri in the East to Llanbedroc, Chateau Audela, and Outacite, in the West. At the modelled stations operators face “North”; “West is therefore to the left, and “East” to the right. In Railway terms, Eastbound trains to Port Pourri are Up trains, Westbound trains are Down trains.

Both Companies operate Passenger and freight trains over the double track main line between Port Pourri and Ballyfuss. At Ballyfuss, SIR trains branch off to serve Cotes Coppice, Rock Bottom and Outacite together with the Eastbound branch to the port of Monks Bay and the industrial parks at Notting View, and Dussna Pier. SIR is also responsible for managing the marshalling sidings at Butt End (Oatway Sidings), and the deep-water port facilities at Applefred Point. SIR provides railbus services from the Heliport at Monks Bay to  Cotes Coppice, Ballyfuss, Butt End and Port Pourri.

SIR’s lines go through mountainous territory, and are heavily graded, and care has to be taken to provide the right size, or number of locomotives for each train.

CfO passenger services serve all stations via Ballyfuss, Over Cotes and Aveatques Vale (Vale Junction), to Llanbedroc and Chateau Audela. CfO Freight customers include Fincher’s Works and the Bottling Plant at Butt End, the  the business park at Llanbedroc, the “Wendy B Mine” at the Vale, the Dairy at Uppa Gumtry Business Park, and the Green Frog brewery at Over Cotes.

Locomotives are battery powered.  Each loco has an on-off push button, and a forward and reverse switch. Station operators are required to start and stop trains manually. Both hands should be used when operating a locomotive, one to steady the loco on the track, and the other to work the controls.

Because of the layout of both Railway and garden, the operators at one station cannot usually see their counterparts up or down the line.  This means that Station operators must use the telephones that link adjoining stations to talk to each other (Lift receiver and press button to ring out at other end), and to reach agreement as to the next train that is to run. Trains MUST NOT be despatched before obtaining the agreement of the next station.

Operation of Double Lines (between Port Pourri , Butt End and Ballyfuss; and between Over Cotes and Vale Jct,)

On the double track lines the “rule of the road” is that trains always run over the Left Hand Line.  On no account should be trains be despatched over the “wrong” line.   If circumstances arise that require such working then the “Controller should be consulted first, and the station masters must come to a “clear understanding”.

When a train is ready to depart, the sending station must telephone to obtain the permission of the next stationmaster. The train may not depart before that permission has been given.

The sending station must give details of the train (headcode (where applicable) freight or passenger), where it is going, and number of vehicles in the train.

The receiving station must check that the train has arrived complete and then telephone the sending station to confirm this.

The sending station should not offer another train in the same direction without getting confirmation that the first train has arrived safely.

Trains must not be allowed to run onto the single lines between station limits (i.e. must not pass a “STOP do not proceed without authority of token” sign) unless the train is carrying the token for the section, or the token is at the station of departure.

Before sending off a train, phone the next station to get permission. Before train the leaves, clip the token to last vehicle.

Exceptionally, a second train may need to follow the first over the single line before another can travel in the opposite direction.  In such a case, you will need to keep the token for the second train, BUT:

· Before you despatch the first train,  you must get the permission of the other station operator;
· If the operator at the other end does not agree, you MUST send the token with the first train.
· the last train in one direction over the single line MUST carry the token clipped to the last vehicle

When any train arrives at a station the receiving station must advise the sending station:

· If the token is on the last vehicle, unclip it and keep it.
· If the expected token is not there, telephone the previous station to find out what has happened.

REMEMBER, you may not send any train away from your station UNTIL you have the right TOKEN there

Special Instructions relating to one station

At each station there is displayed a schematic diagram of the station layout. This includes details of the particular names of lines, number of each platform, and locations of freight customers. Please note that on the schematic diagram, lines are marked with arrowheads to show the permitted direction of working: many lines in stations are intended to be worked by trains only in ONE direction. Do NOT try to run trains against any indicated direction. The layouts of the stations have been planned to provide adequate facilities for both through and stopping trains. Other special instructions are posted in written form, either on the schematic or separately.   Many of these instructions relate to what station A must tell or do for adjoining stations, and if they are ignored can result in “traffic jams”.

A locomotive must be at the FRONT of any train running between stations. Steam engines, especially tender engines, should, as far as possible, run chimney first. Whereas for a train from Monks Bay to Ballyfuss, a train must reverse direction at Cotes Coppice, steam engines MUST always be turned so that they climb the spiral chimney first.

Locomotives vary in power, and therefore can pull trains of different weights/lengths. Locomotives are all named, and the number of letters in the name corresponds to the power rating of the loco. Train-loads are calculated by counting the number of axles on the wagons/coaches in the train (a steam locomotive tender does not count as part of the train). The maximum loads for the whole system are therefore as follows:

Train loads of Gravel (birdseed) from The Vale to Port Pourri, Coal from Rock Bottom to Monks Bay, and Containers (Llanbedroc or Ballyfuss to Port Pourri) run as block trains. Extra wagons can be added to these trains provided the permitted number of axles (for the power, or the timetable permission) is not exceeded.

All freight trains/wagons should work to the destinations shown on the wagon label facing the operator. This may state a specific destination (e.g. Fish to Outacite, return empty to Monks Bay), or may just give a letter and a number. In the latter case, the destination for the individual wagon is determined by looking up the letter on the “compass”. All wagons for the same destination should be marshalled together, and despatched in accordance with the timetable instructions. These instructions will include directions as to the order that wagons for different destinations should be included in the train.

Where no timetable is in force, wagons should be despatched either direct to the required destination (where there are sufficient wagons to justify a train), or routed to Butt End (Oatway Sidings).

Special Instructions relating to one station

At each station there is displayed a schematic diagram of the station layout. This includes details of the particular names of lines, numbers of platforms, and locations of freight customers. It is important to note that many lines in stations are intended to be worked by trains only in ONE direction. Do NOT try to run trains against any indicated direction. The layouts of the stations have been planned to provide adequate facilities for both through and stopping trains. Other special instructions are posted in written form. 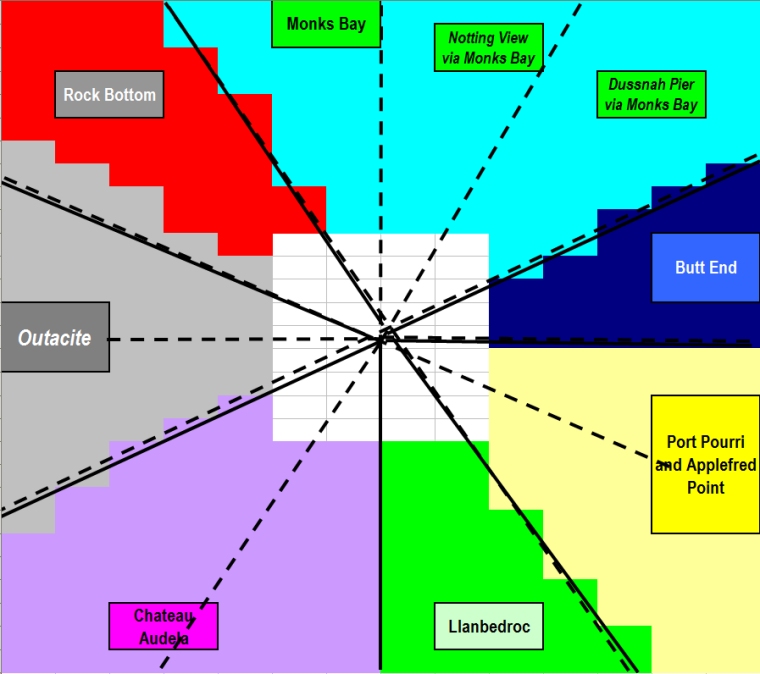