These rules will apply only on days set aside for steam locomotive operations.

Somesay Island Railway is primarily a battery operated line, built to 1:24th scale. However most of the line is also capable of handling 1:19th scale stem locos of “Roundhouse” proportions.

SIR is all 32mm gauge track, a mixture of Peco SM32 and Tenmille. Minimum main-line radius is 42” (most is much larger radius) with some sidings of 36” radius. Pointwork is a combination of Peco, Tenmille and home-made. Main line Frog angles are no 4 or larger (sidings can be tighter), back to back measurements are to meet Roundhouse/Slaters’ “Coarse” scale standards. At rail-head level clearances are for stock that is 115mm wide, and adjoining tracks are at 5” (125mm) centres. On the Main line there is at least 170mm of headroom in tunnels and under bridges. The Branch to Monks Bay is more restricted in height and is not normally used for steam operations.

Running in this way means that trains can follow each other, “on sight” and without risk of meeting any conflicting moves other than within Port Pourri Station area.   However, please treat all tunnels, and the lines through the shed at Butt End, with caution, and do not enter any such tunnel until you are certin that the preceding train has emerged complete.

The route includes two spirals, (one down between Ballyfuss and Cotes Coppice, and the second up between Rock Bottom and Llanbedroc).   The route means that trains frequently duck away behind plants, and take short-cuts that Human drivers cannot follow. For this reason, Radio Control is an advantage. Where manual operation is to be used, a slow running loco will not pose a problem, but a runaway Mamod will need both a launcher and a catcher.

It would be very helpful if each driver can arrange for the last vehicle on any train to carry a tail lamp, or some form of “last vehicle” marker (these can be loaned on the day) so that if part of a train gets “left behind” it is immediately obvious, and not the source of a collision.

A passenger train leaving the terminus at Port Pourri can make a trip round all of the nearly 500ft of route that is cleared for Steam Operation in about 10 minutes. Arriving back at Port Pourri, running round the train and turning the loco takes about another 5 minutes, making it feasible to complete two round trips on one boiler fill.

There are five stations suitable for steam raising points, with suitable sidings at the front of the layout at a comfortable working height.   These are at PORT POURRI (Bays off a 22” Turntable), BALLYFUSS (two sidings in the “outwards” direction), Cotes Coppice (a loop), LLANBEDROC (one long platform road that is trailing to direction of travel). and the Vale (a Loop).   It is suggested that drivers set up camp at one or other of these steam raising points and re-fuel/re-water at least every second passage.   It is suggested that, as Port Pourri is the location where there is a need for trains to be “run-round”, or for an exchange of engines to take place, that drivers may find it more convenient to steam-raise at one of the other stations, or at Applefred Point
If a locomotive runs into difficulties/short of steam, please divert it into a loop or siding (if necessary taking advantage of “assistance in rear”) and having cleared the main line, ensure that points are reset so that other trains can operate un-impeded.

Lines shown in Continuous Black are “level”, above ground, and accessible, at stations, from Operating pits.

Lines shown in dashes are at ground level and/or are on gradients.

Please note it is NOT possible for visitors to bring and run steam locomotives on any of the “Trains for MARIE CURIE CANCER CARE” days. 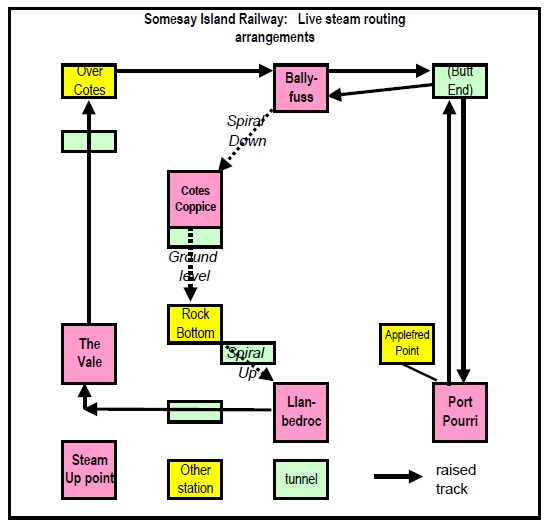